Alice Bertrand is an active member at Diamond’s Management Group, Inc. (DMG). Mrs. Bertrand and her husband founded DMG. in 1994. She is committed to providing every customer with superior services while enforcing our values and integrity. She has been a part of a husband and wife team business partnership that originated with Bert’s Underground Construction in 1981. She has assisted and managed all facets of Construction with her main role being the business Comptroller. She is responsible for all aspects of financial management of the Company. Mrs. Bertrand’s experience includes the development of financial andoperational policies, metrics tied to the strategies and monitoring of control systems to preserve the Company’s assets and report accurate financial results.

Industry/Community Involvement:
Alice is a member of the National Utility Contractors Association (NUCA) and Prince William County Chamber of Commerce. 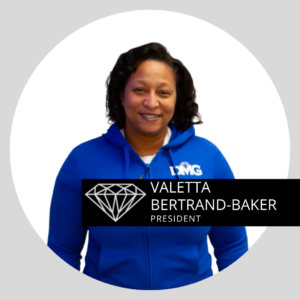 Valetta Bertrand-Baker has worked in the Gas industry since 2007. She joined Diamond’s Management Group, Inc. in 2014 and took on the role as Vice President. She was later promoted to President. As President, Valetta Bertrand- Baker is the second generation of family members to lead the Company since its start in 1981. She is committed to aligning the organization’s strategies and goals. She is credited with being a driving force behind Diamond’s Management Group, Inc.’s expansion while promoting the Company’s continued growth. Her leadership exemplifies strong family culture and values advocating a continued commitment to ensuring the highest standards on safety, ethics and core values.

Education:
She has a Bachelor of Arts in Communication from George Mason University and an Associates of Applied Science Degree in Contract Management from Northern Virginia Community College.

Glenn Bertrand, Sr. has over 40 years of experience and is well known in the construction management, natural gas, and site development industry. Mr. Bertrand’s experience stems from his prior employment at Washington Gas Light. In 1981, Glenn and Alice Bertrand founded Bert’s Underground Construction, which provided installation of underground pipeline services to Washington Gas Light. He later founded Diamond’s Utility Construction, now known as Diamond’s Management Group, Inc. Mr. Bertrand continues to be the foundation of the Company. With his knowledge and experience in the construction and gas installation industry, Mr. Bertrand will continue to build contractor/utility relations. His vision is to see Diamond’s Management Group, Inc. become a turnkey solution for our customers. 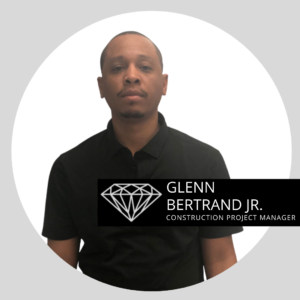 Dalco King is an experienced leader with over 30 years of experience in the natural gas pipeline industry. Mr. King is also well-versed in leadership, project management, strategic planning, and budget management. Mr. King began his career in 1986 at BC&G Underground Construction Company serving as an Assistant Superintendent. In his role, he provided construction management and oversight for new construction and replacement projects throughout the Metropolitan area. He then served as a Superintendent at Diamond’s Underground Construction Company. In his position, he managed the new construction department, in addition to proposal submissions, compliance requirements and customer relations. Mr. King then served at Northern Pipeline Construction Company, holding various positions within the natural gas pipeline department, with the most recent being Director of Construction.

As Director of Construction, he provided leadership and direction for the Maryland Operations by overseeing over 30 below ground crews, while supporting management and administrative personnel. Most recently, Mr. King held the position of Project Construction Supervisor II at Washington Gas Light, before becoming a part of DMG’s team. At Diamond’s Management Group, Mr. King is responsible for coordinating the development of the company’s gas pipeline business and project strategy, as well as management and oversight of all customer relationships. 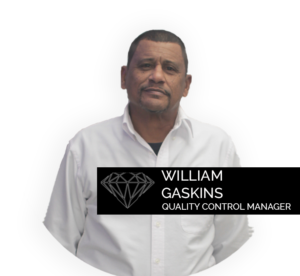 William Gaskins has over 20 years of experience in the Safety Compliance, Quality Supervision and Management industry. William is proactive and helps to identify high risk situations based on the scope of work and surrounding area. William has developed knowledge and expertise in the areas of risk management, safety, field operations, and project management. William coordinates and conducts safety meetings specific to critical stages of the project in an effort to maintain continuity among all field personnel. Under Mr. Gaskins management of the HSE program, Diamond’s Management Group, Inc. was received an award from our insurance provider for operating three years without any Worker’s Compensation claims. In addition, the company was able to become Gold Shovel Standard Certified.